I mean, this is delicious, and if you are blessed with kids that like lobster and shrimp, the rest of this is just cheesy rice at the end of the day. Things were apparently going well as I sautéed the shrimp in the butter, then the shallots—the girls were enticed by the smells coming from the kitchen and actually excited for dinner. But then the Cognac hit the pan and, well, the shit hit the fan. I’d like to believe it was just the brandy that turned the girls off, but the reality is this might be a bit too sophisticated a dinner for your average 4-year-old.

Tonight I’ll execute the master plan: meatballs and pasta (again). It might not be the most exciting thing in the world but at least we know the girls will eat it and everyone will be happy around the table. It’s the new romance. 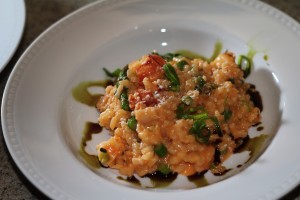